​Don't expect the impossible from your partner blog 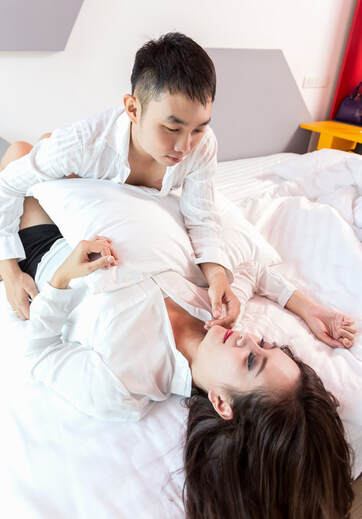 I was lucky.
Once I got to the point of trying intercourse, the penis of the man I was with at the time remained erect.
He was calm, confident.

Yes, luck, because this is not always the case.

You think, the man wants intercourse, of course his penis remains erect.

Mirjam and Liam are sitting across from me in my coaching practice and looking frustrated.
They have already come this far.

She was ready and so was he. But the moment Mirjam wanted to insert Liam's penis into her vagina, it became limp.

"I don't know what happened, I'm just afraid to do something wrong, then we'll be back to square one," Liam says defeated.

Not only for Liam, but also for many other men, this phase of finally being able to try  intercourse is great but also difficult.
Often these men have held back for years when it comes to their desire for intercourse. They have been looking forward to it for so long. They want so much to be intimate with their partner that way. But the moment it is about to happen, nerves strike.
Thoughts can take over:
• "What do I have to do exactly?"
• "Oh no, it cannot be too fast."
• "Oh yes, it works best that way."
• "Oh no, as long as I don't hurt her."

What do you think? Maintaining an erect penis with these thoughts is very difficult.

Mirjam looks at me expectantly: "Say something about it. It's not normal, is it?"

I say: "I understand your frustration very well, Mirjam. I can imagine how disappointed you are. But now it's your turn to show your love and patience to Liam, in addition to his emotions. Just like he did all this time for you. "

I look at Liam and said: "It is normal for this to happen and you are certainly not the first. I have heard this so many times." He sighs deeply.

Overcoming vaginismus is also an interplay of openness about feelings and thoughts in this phase. And from action by trying. Just like in all previous steps.
Above all, be gentle with each other and have fun.